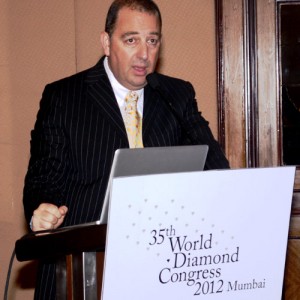 This article was recently published in Jeweller Magazine:

The international diamond industry has a new voice following the launch of the World Diamond Mark, a not-for-profit marketing arm for the industry.
The World Diamond Mark initiative was announced by Australia’s Rami Baron, vice president of the Trade and Promotion Commission of the World Federation of Diamond Bourses, the world’s largest diamond organisation, at the 35th World Diamond Congress in Mumbai, India.

The initiative aims to give both the diamond and diamond jewellery industries a unified marketing arm aimed at promoting the precious gemstone to the world.

Baron said the World Diamond Mark had come about following extensive behind the scenes discussions and planning to facilitate unified support for the proposal from all sectors of the industry.

“We understand with previous [marketing] initiatives they have always approached the diamond mining community to put their hand in their pockets. That is such an unbalanced approach,” Baron said. “Under our initiative the initial seed capital will come from sightholders and manufacturers, the middle tier of the diamond trade. Once we have the initial capital we then believe it is fair and equitable to approach the mining community.”

Baron said because the diamond mining industry had traditionally funded the promotion of diamonds, when it came to forming a unified approach such as this it was only right that the manufacturing side of the industry made the initial investment before seeking support of the miners.

“We believe that we, as the industry and the middle body, have to come first and show the initiative. Everything that the program is about is dollar for dollar, so if we put up one or two million dollars, then we hope the mining community will match it. That is a fair and equitable solution. Ultimately we will ask the same thing of the retail community.”

Baron, who also became the first Australian elected to the executive board of the World Federation of Diamond Bourses, said there was a lot of support within the industry for the initiative.

The World Diamond Mark is hoped to be the beginning of a new era in the diamond industry, including the largest accreditation and marketing programme in the history of the diamond sector.

The World Diamond Mark will lead to the beginning of Authorised Diamond Dealers, an international strategy and action plan based on education, confidence and generic marketing to generate sustainable returns for the industry. This strategy has been designed to bring direct benefits to members and make diamonds and diamond jewellery synonymous with the world’s most desirable luxury items.

The initiative will be launched with the slogan, “When the world loves, we are here”.