This March summit was hosted by the Singapore Diamond Exchange. Aside from a tremendous Asian summit, the SDE also hosted the WFDB executive committee board meeting.

I have probably said this before but when one has the opportunity to sit around a table with people from America (both east and west coast), China, India, Malaysia, Russia, Belgium, Israel, Japan, Korea and South Africa for two days to discuss the current state of the diamond industry, one cannot help but feeling a sense of pride and achievement that you are making a difference.

To discuss industry issues, its future, and then plan how together you will work to improve the situation for everyone, (whether they are members of the WFDB or diamond clubs around the world or not) is exhilarating!

The three biggest issues facing our trade is the need for global marketing of diamonds to the consumer. To this end, the World Diamond Mark is such an initiative and immediately following the Asian summit the WFDB (with the support of UBM) announced the official launch at the Hong Kong trade show. 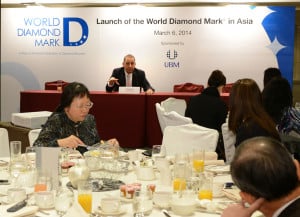 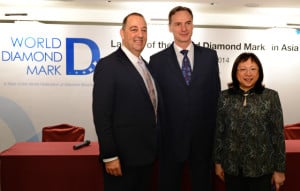 Click here for more pics from the Asian Summit

The second issue is the situation where international banks want to move away from funding the diamond industry. The reason is that the American government’s new compliance laws and the introduction of the Franklin Dodd Act are making it increasing difficult for the trade to transact its normal business, with US banks.

The inevitable consequence was the introduction of the process referred to as “KNY” - “know your customer” which is being implemented by our industry world wide. This requires you to know who you are selling to, not just conduct a cursory check.

This is not dissimilar to the demands of Australian banks requiring information on cash transactions greater than $10,000.

The third issue is Synthetic diamonds. GJPEC – the Indian diamond industry representatives – were commissioned to conduct research and their findings were presented to the executive by one of the worlds leading consultancies A T Kearney. Research clearly identified that the problem is not as large as has been reported but, more importantly, we need to take steps to minimize the proliferation of synthetics which unscrupulous dealers may attempt to mix into natural parcels of diamonds. This is particular problematic in parcels of melee because of time costs and complexity of identifying these goods. The term "salting a parcel" is being used to describe this problem.

The current proposal on the table is that both the buyer and the seller take responsibility when transacting diamond sales.

Addressing the synthetics issue, WFDB adopted a methodology to be immediately implemented, where all affiliated bourse members will be required to incorporate a statement on their invoices and memos that clearly defines the natural origin of diamonds. There is a requirement that both the buyer and seller shares the responsibly.
Ernie Blom President of the WFDB added, “We at WFDB acknowledge that synthetic diamonds are legitimate as long as they are properly disclosed and marked. Having said that, there will be a zero-tolerance policy toward any attempt to sell synthetics as natural”.

The new WFDB website should be online at the time that this goes to print with a serious push by the executive to include women and younger members in the next phase of where the industry is going.

Whilst in Hong Kong, I visited the Hong Kong Jewellery Fair and, as usual it was very well supported with over three and a half thousand industry members attending... and billions of dollars worth of merchandise on display!

This will bring a smile to your face. Aussies were sitting round tables negotiating half carat diamond purchases when a friend of mine – a Diamantaire – caught my eye. Lets have coffee once I've sealed the deal for this 15carat, RBC at $1.8 million he said... needless to say my wife missed out this time!