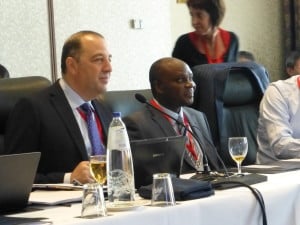 I write this article whilst in Antwerp Belgium as we come to the close of the 36th World Diamond Congress.

Without a doubt the highlight for me on this trip was having Gus Hashem, a fellow club member, join me and to see and experience what I have in the past few years and appreciate the high regard in which Australia is held on the world stage.

This year I was tasked to run the trade and promotion committee meeting, as the president could not attend. It was not only a great honour but we had a huge turnout of observers, in particular the Minister of Mines and Mining Development of Zimbabwe, the Hon W.K. Chidakwa and a number of his ministers .

It was a robust and interesting meeting where we discussed launch of the new WFDB Website and the impact of social media in our industry . The most contentious issue was the unbelievable delays experienced in GIA certification. The numbers are staggering. GIA grades approx 16000 stones per day - not bad for a non profit organisation. The issue is that it can take three months to get merchandise graded, in simple terms, is becoming an untenable situation which requires immediate action. The US Bourse already had discussions with the GIA who admited they dropped the ball and are looking to play catch up as fast as possible.

At that point I formed a committee from members of the Israeli, Antwerp, and USA clubs which I took to the board for approval to look to see what could be achieved for the benefit of our members. As we are in ANTWERP, a dialogue with other respectable Labs to provide capacity was initiated. HRD was keen to respond and by the time this article goes to print there should be possible solutions in place. 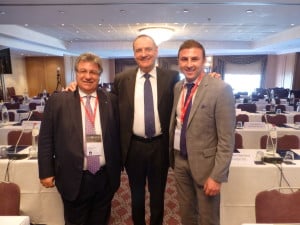 In the numerous discussions with the various LABS the verdict is consistent, the degree of synthetic diamonds in the market has been greatly exaggerated. Large companies like Sterling in the USA are testing even one pointers. We had Tom Moses, one of the heads of GIA on a panel where I personally posed the question when and is a tool being developed to test diamonds already set in jewellery. The answer was it's on the horizon, but no firm commitment was made although he agreed it is critically needed as those who maybe passing off synthetics will not even send the stones to a Lab. Tom and I spoke subsequently and he gave me an undertaking that a synthetic diamond testing machine will be sent to Australia in the coming months.

The World Diamond Mark has recorded a major success with the official signing of Istanbul being the launching pad for the pilot of the WDM. The President of Boursa Istanbul flew in for the signing ceremony. Following Istanbul the WDM will continue a secondary program in Dubai. Both these steps bring to fruition a vision which Alex Popov, Suresh Hathirami and myself envisioned to create a generic diamond marketing campaign to ensure the health and growth of the diamond and jewellery market. This dream is coming to reality and it is enormously gratifying. 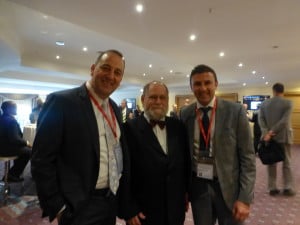 Gus, Martin Rapaport and myself during a catch up break.

As usual I caught up with great friends and colleagues from around the world. I can tell you all that under the WFDB IDMA and the World Diamond Council the industry is in good hands and it is highlighted by the integrity and statesmanship of our leader Ernie Blom, President of The World Federation of Diamond Bourses.

I could become the biggest diamond producer ever if...

...I just had access to this planet :) Twice the radius of Earth, eight times the mass, and the surface is covered in graphite and diamond instead of ...

This March summit was hosted by the Singapore Diamond Exchange. Aside from a tremendous Asian summit, the SDE also hosted the WFDB executive committee...

The following is my recent interview regarding the DDCA, published in the Jan/Feb issue of Jewellery World What were the biggest highlights for the DD...