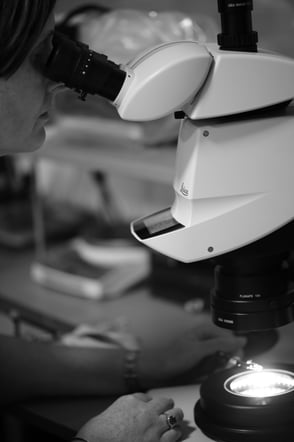 Gemmologist Kym Hughes examines a gem under her stereo microscope.

Just as in medicine, man's desire to reproduce mother nature's greatest creations is as tempting as the forbidden fruit! Add a financial incentive and there’s no stopping us...

The technology to recreate a diamond from all the elements of nature has been around for some time; however, the ability to do so consistently and in a cost effective manner, has now arrived. Thankfully, those of us in the diamond industry have always appreciated that - as the purveyors of one of life's true luxuries - the consumer relies on the diamond retailer to be honest, ethical and knowledgeable.

The speed at which synthetic diamonds has entered the market has (to some extent) taken many by surprise leaving the majority of people in the industry with little understanding of the science, availability, pricing and proliferation.

The last few months has seen an extensive number of articles and commentary about the problems associated with synthetics being introduced into the supply chain unbeknown to the recipient. This has been particularly prevalent in parcels of small goods. Even the large gem labs and DeBeers themselves do not have the tools to commercially test every small stone to ensure that synthetics are not mixed with natural diamonds, in a cost effective manner.

The larger labs such as GIA, HRD and IGI have reported that larger stones have been sent to them under the guise of being "natural" -  only to be discovered otherwise.

A recent article in Jewellery net Asia criticized the industry for “not being more vocal in naming and shaming”. You may have seen my response.

Armchair journalism is easy, but it is the position of the WFDB that we will not stand by any of our  members acting in a fraudulent manner.

Indeed, at a recent meeting, the executive of WFDB prepared and issued commentary as well as several strongly worded statements which can be included on all invoices, all the way down the line that ensures diamonds are correctly identified as being natural.

As we all know, the diamond industry looks to the World Federation of Diamond Bourses to be the voice of our industry.

The Antwerp World Diamond Council organized a meeting last week (held in Antwerp) with attendees - Rio Tinto, DeBeers, Alrosa, GIA , HRD, IGI and a number of the largest diamond dealers in the world. In this meeting, it was determined that:

The meeting further concluded that:

I began this article with a title “Nightmare or Nightingale”.

The question we have to ask ourselves is do we perceive the  introduction of synthetic diamonds as a nightmare (because undoubtedly a small percentage of individuals will look to profit by acting in a deceptive matter), with potentially disastrous effects - reputations will be damaged, and the industry constantly under siege for ethics, could be damaged beyond repair.

The flip side, and here comes the “Nightingale”, is that – due to the drop in costs – there is the ability for more people to appreciate diamonds and therefore grow our industry to heights never seen previously!

The appeal of being able to own a natural diamond; the sheer exclusivity and rarity of one could push the prices of natural diamonds through the roof. Almost every other gemstone in the world today has its counterpart  formed in the synthetic environment, so it was only a matter of time that it would happen with diamonds.

My personal belief is that, as long as we communicate in a clear and transparent manner and uphold the highest of ethical standards, the prominent and unique place in which diamonds are held in the eyes of all, will continue, and be able to withstand the criminal behavior of a small number which is prevalent in all industries.

Me? I see this as polarizing the industry, galvanizing us act as one, with the WFDB (aka Florence Nightingale) helping all! The next step is the emergence of the World Diamond Mark to tell our story in the most eloquent manner.