Synthetic Diamonds, Contentious Reports and the Next Generation

I’ve recently returned from the UK having attended the WFDB Executive meeting held at the London Diamond Bourse in Hatton Garden.

Flying 30 hours to arrive on a Sunday morning to find your hotel room is not ready and you need to go straight into a meeting isn’t the best way to start the day! Added to the fact that the air-conditioning at the Bourse wasn’t working and we were sitting (15 of us) in a boardroom for 8 hours, was what could be described as... well challenging to say the least!

However the good news - the agenda was diverse and highly topical. The Executive members come together giving up their time (and often at their own expense) to discuss the issues faced by our industry; the goal to find solutions and coordinate discussions worldwide on topics which impact both up and down the pipeline of diamond sales.

Looking at the photo of the group you can appreciate that you – as members of the industry – have representatives from America, India, Belgium, South Africa, Israel, Germany, Australia and the UK all sitting in one room, looking out for your interests. Unfortunately missing at this meeting was the representative from China.

An interesting statistic that few know is that 95% of the polished diamonds traded in the world today moves through the hands of one of our members. 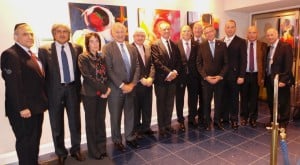 WFDB Executives in the hall of the London Bourse

One of the hot topics discussed was the problem of the high prices of rough currently being experienced which of course means that the manufactures cannot maintain a reasonable margin. The major banks working closely with the diamond industry are concerned about our industries viability and their exposure to it.

There have been a number of high profile bankruptcies; as well, in Israel last year there was an exposé with illegal banking arrangements implicating prominent diamantaires.

This was not the only banking issue. A report soon to be released by the Financial Action Task Force (an inter-governmental body tasked to combat money laundering and terrorist financing) has targeted the diamond industry. The problems which we (the WFDB) have identified, is that they have looked to create a very disturbing picture of our industry which is unbalanced and looks to use the exception of bad behaviour to taint our trade. It is trying to discredit an industry which has implemented some of the highest ethical standards of any industry world wide! We await the final version of this contentious report. However, rest assured we will vehemently challenge any and all biased, unfounded and counter productive slurs directed towards the trade.

Still a hot topic (and on our agenda) – Synthetics.
There is no doubt that the difficulty of identifying synthetics today has enabled those who thrive in defrauding others have and will continue to substitute natural with synthetics goods, particularly in the assortment of melee, until such time as they are caught and the technology easily identifies it like HPHT. Major labs have picked up a number of larger goods sent for certification with no mention that they were synthetic. The concern is that the aforementioned occurrence is greater than anticipated, and the results will be that it will erode consumer confidence. Correctly so if we are found to be misrepresenting our goods. The onus is on each and every one us to know our suppliers and have an undertaking from our suppliers upstream that they guarantee that the goods we purchase are not synthetic.
FULL DISCLOSURE IS THE ONLY WAY

I believe a few points need to be made about synthetics.
We must accept that they will become a major part of the diamond industry just as coloured gemstones have had synthetics for many years.
Labs will certify synthetics because it means printing more certificates so why wouldn't they... that is their business. In countries like Australia there are very few labs that have the technology to identify synthetics. Those labs which have not invested in the latest tools will be leaving themselves wide open to a law suit if they have wrongfully certified diamonds as natural and are found to be synthetic. The industry is still challenged in terms of the inability to check stones already set in a mount.

The WFDB is formulating a statement that could be included on invoices. Coupled with the Kimberley Process stamp, a guarantee by the supplier of full disclosure of goods on their invoices will be required.

One of the highlights of the meeting was the appreciation for the need to introduce the next generation to the role of the WFDB Executive and bring them into congresses and meetings to see how and what is discussed and implemented. It was suggested that a "youth think tank" be formed to hear their perspective on the industry and the opportunities/changes that should be made.

A personal highlight was reporting on the progress of the World Diamond Mark. There is considerable interest that a pilot programme may be launched - initially in Europe. We have had tremendous support from HRD to help with formulating a robust educational program. Alex Popov our Chairman has been traversing the globe meeting with partners in the USA where he signed a MOU with IDMA to China where he just completed extensive discussions with the diamond exchange in Shanghai. It’s a big project which (like an aircraft carrier) takes time to move and manoeuvre in a industry which has been slow to accept change on many levels, and yet so versatile in others.

Another highlight was a private tour through the trading floors of Lloyds of London, the epicentre of the insurance world. Those of you who know of my jewellery insurance business, Q Report, will understand that this tour was especially interesting, seeing first hand how high risk insurance policies have their risk shared amongst a number of syndicates. We were taken on a historical tour of Lloyds which included a photo of the original bell that would be rung each time a ship went down and a claim made. 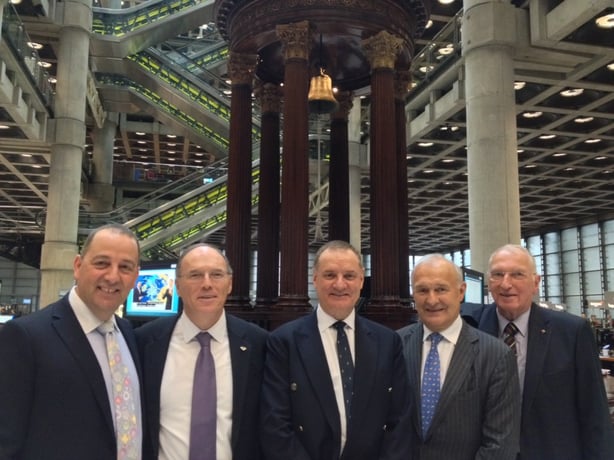 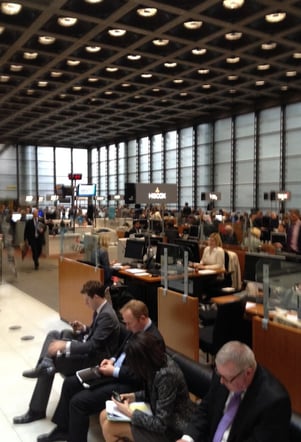 One last word... no one has all the answers, but you can appreciate that there is an organisation such as the WFDB which invests countless hours and money working exclusively for the benefit of all the diamond and jewellery industry to insure its profitability and health now and into the future.

This article will be published in the December issue of the Jewellers Trade Magazine. Click here to visit their website.