I recently returned from the WFDB president Congress in Istanbul Turkey. Coming to this part of the world is always fascinating as it’s a kaleidoscope of colours, smells, flavours, religions and styles of jewellery.

The main thrust of the Congress was to understand where the money is in the diamond pipeline, and what is happening in the banking sector that is impacting on the diamond world. Further topics discussed were the increase in the amount of synthetics and the difficulty detecting them, diamond certification and how the WFDB is moving forward with the World Diamond Mark. 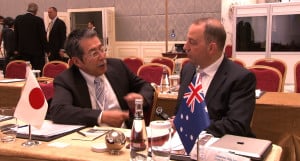 The middle man, in this case the diamond wholesaler, is making the least amount of money. Why is this happening? Unfortunately too many reasons to list in this article. At the end of the day, like all segments in the diamond jewellery market, one has to look at how one will differentiate themselves and be able to create a value proposition to earn an added premium for their goods.

Changes in the banking sector rules and procedures have a significant effect, all the way down the line to the diamond retailer. There is a ground swell by government and the banking sector to further restrict the flow of money around the world to inhibit money-laundering and financing of terrorism. We at the WFDB fully support such initiatives. The problem with these initiatives is that someone forgot to include the diamond industry in the discussions. 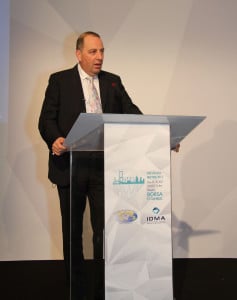 Speaking at the 2013 WFDB Presidents Meeting in Turkey

In initial correspondence with our executive leadership the questions posed showed a naiveté and lack of understanding of the diamond world. An example of this is that they could not understand how is it possible that a parcel of goods is sent to 10 different countries back and forth and yet a sale is never recorded (they had no understanding of the common practice of sending goods on consignment or to be viewed). Furthermore, they considered it highly suspicious that a parcel of diamonds priced at $1million dollars was sent to a dealer who merely re-sorted the goods into a variety of smaller parcels not changing their weight or doing anything to them and yet he could on sell the exact parcel for say $1.2m... this has got to be suspicious... according to them. Them being the Edgemont Group who is holding these meetings to set policies which will be implemented by governments and banks world wide. The good news is that we the WFDB have now been invited to join the discussions. 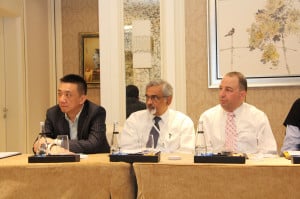 For those who haven’t been watching this space, this is an initiative which I have been closely associated with and have developed with two presidents of the WFDB from Russia and Singapore, whereby we recognized the critical nature of creating a generic marketing campaign for the diamond and industry based on the success that DeBeers had in previous generations.

The World Diamond Mark will be executed based on two strategies:

1. Initially a new tier of membership will be created for the jewellery retailer who will be identified as an ”Authorized Diamond Dealer”. They will achieve this status through an accreditation process.

2. The second strategy is a strategic alliance with a major credit card company who will become the official partner of the diamond industry.

The funds generated will be used to develop generic marketing campaigns which will be adapted for each of the participating countries.

An interesting statistic revealed during the congress is that in the 12 year period from 1999 until 2011 the growth in the luxury market has increased by 77%. However, the diamond jewellery segment has only increased by 26.5%. This statistic alone tells us that the industry share of the luxury wallet is decreasing, and it's the branding of Tiffany’s, Rolex, Gucci, Chanel and Hermes to name a just few have tripled in comparison.

The World Diamond Mark is not looking to create a brand of diamonds. In fact we support all different branding and non-branding of diamonds. Its fundamental mission is to increase the growth and health of the diamond and jewellery segment of the luxury market.

If we do not bring diamonds to the forefront of consumers spending and make them once again associated with love and beauty, and reinforced with the confidence that we understand and are responding to the social issues which the industry is facing , we will be overtaken by others who will make their gemstone the most sought after.

I also managed to capture some footage while I was there. A visit to the Grand Bazaar in Istanbul where I mingled with local jewellers and asked them questions on their businesses led to some interesting responses. As usual meeting with diamond dealers from all over the world is so much fun, and this time I interviewed a number of the presidents from around the world and got some great responses on how they started in the diamond business. Once the editing is completed I'll be posting several of these videos here on the blog - make sure you subscribe by entering your email into the field at the top right of the page so that you receive updates when these come out.