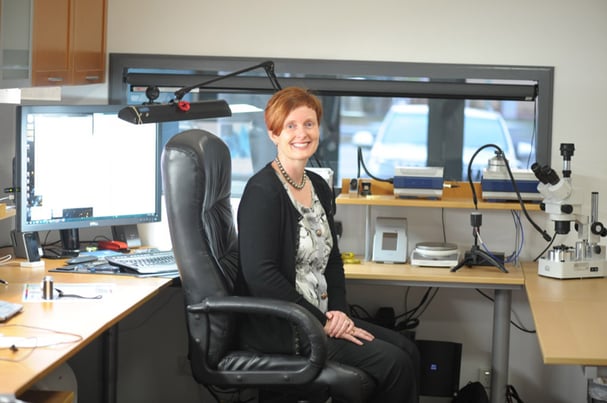 Kym Hughes owns and operates the only Fourier Transform Infra-Red Spectrometer in the Australian gem testing and jewellery industry. I interviewed her about the business, her amazing equipment, and what inspired her to work in this field.

What made you want to become a valuer?
I had been in the jewellery industry just under 10 years, working as a cut and polished diamond sorter. Then I moved to the UK and worked in various areas of a high-end jewellery retailer (David M Robinson jewellers) in Liverpool in the UK. I was hired in the first instance to help put the stock on the books for his Altrincham store which was due to open, it was then coming up to Christmas so I was put on the shop floor to sell. I had never sold jewellery retail before, however I obviously did well as I was to go into the valuing department after Christmas to help out the full time valuer. I was also going to enrol in the British gemmology course at the same time. This never happened as my skills on the shop floor were recognised and as they say I've never looked back. I worked in the senior sales position for approximate 5 years.

We then came back to Australia, and I worked again for a diamond wholesaler. It was at this time I thought that I should get some education within the industry, so I embarked on the 2 year Gemmology course which I then followed with the “Valuers course”. But I realised that with all this education and added skill that I should work for myself, so gave up full time employment (with my husband saying maybe I should stay in jewellery retail part time until my valuation business was established) however that never happened and I have never looked back, that was 15 years ago.

Along the way I have joined the committees of the Gemmological Association of Australia (Qld) as a committee member and now President, for about the last 3 years have been one of the Qld reps on the federal body of the GAA, State president of the National council of jewellery valuers, and for about the last 10 years National president of the NCJV. The reason I joined the committees is I feel an obligation to give back to those who helped me, without these people I truly wouldn't be doing what I love today. So I guess a bit like that movie Pay It Forward.

I have been asked many times throughout the years to come and work for various people, however I now consider myself unemployable in the sense of having worked for myself for so long. I think I like the “freedom” if that’s what you'd could call it for working for yourself, and also quite frankly I really don’t think they could afford me anyway. 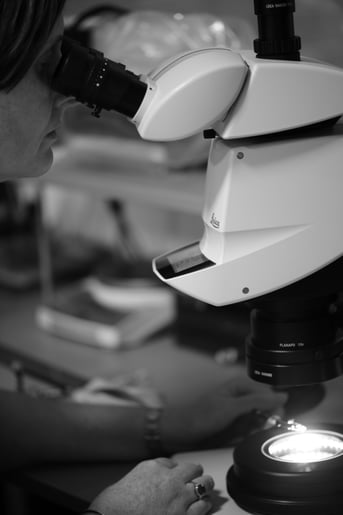 Kym examines a gem under her stereo microscope.

What started you on the journey of more advanced gem testing?
I would say that one of my gemmology teachers, the late Dr Grahame Brown would be the person who started me on this ride. I had a blue Beryl in a ring that was giving me some odd readings, it was supposed to be Aquamarine. However I was not getting the right readings for this, so knowing that Grahame had been involved in a court case in Singapore as an expert witness for a case involving Maxixe Beryl (this is not a colour stable, it fades in light) I knew he was the man to take the stone to. We had it removed from the setting and then with normal gem testing equipment arrived at the result of Maxixe Beryl. Had I had my FTIR I would have been able to ID the stone without even removing it from the setting and the results given by the graph indisputably would have shown Maxixe Beryl. I also started to realise that in the gemmology trade journals, more and more results for certain types of treatments needed more advanced equipment. So with this knowledge how could I reasonably go about and value items without testing them thoroughly?

So the first item I purchased was a UV Vis Spectrometer, however I soon found out that this instrument, while it has it’s uses, needed other equipment to help with the process. So I then purchased an FTIR and went to Switzerland to learn how to use it.

What is the hardest thing you need to contend with?
That is a difficult question, as it could be several things. Let's go with: a. People’s expectations that items of jewellery always increase in value, so you have to very carefully explain things to them - Some people get it while others refuse to understand; b. Keeping up to date with all the latest treatments and then being able to identify them and the ultimately price them accordingly.

What is the most amazing piece of equipment you have?
I would say that it would be my FTIR (Fourier Transform Infra-Red Spectrometer).

What can it do?
FTIR can be used for just straight gemstone identification as each gemstone species has its own unique specular reflectance spectra, so when compared to a database identification can be made. It tests for polymer, dyes, oils and resin treatments in Jadeite Jade, Emerald and if necessary glass filling in corundum.

It also test for heat treatment in corundum, Identifies some synthetics and some methods of synthesis, and identifies diamond types which can aid in the identification of treatment and synthetics.

Why would someone request it?
If they need to know without a doubt that the gemstone has any resin for example, in emeralds it is quite common practice now. However if not treated the gemstone's worth can increase considerably. Sometimes you have a 99% feeling that the Sapphire you are testing is synthetic however it is clean, has no inclusions visible by testing with the FTIR, you will have conclusive evidence that it is either synthetic or natural.

Who else has one in Australia?
No one in the gemstone testing/jewellery industry. This instrument is used in other industries, for example solar, oil refining, and the fire service use it to look for accelerants, etc.

Has this technology changed a lot in the last 5 years?
The technology hasn't changed much except that the machines have come down in price. However they are still not that cheap at approximately $50k. And advanced gemstone laboratories are now using them as an essential piece of equipment. 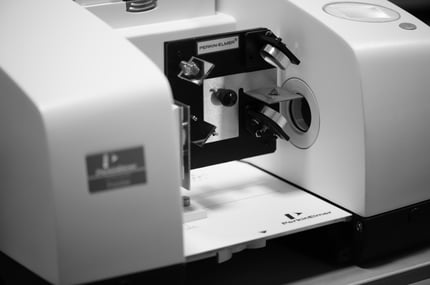 Will such a machine be outdated with new technology?
I don’t expect so, as this machine is testing the IR spectrum within gemstones, and this is where a lot of the data about treatments, etcetera affect.

What will be the biggest challenges for valuers in the future?
Knowing their limitations and passing on advanced gem testing to those who are set up to be able to do it. Owning an advanced gem testing laboratory is not for everyone: a. they are expensive to set up; b. they are expensive to maintain; c. presently there is not much education available on how to use the equipment, and what little is about is expensive.

The problem with all this advanced gem testing equipment (while it may be used in other applications in other industries) is that the gemstone industry is very small in comparison, so most of the equipment available has to be adjusted to make it work for our industry. Also because there is only a small amount of people using it, no one is making it specifically for us.

The key is to have a great network of fellow users of these instruments and learn as much as you can from them, as you need to be able to interpret the data correctly because while you may get all sorts of readings you also need to understand what it is that you are getting from it.

No normal gemmology course available really teaches people how to use this equipment. It could be that this will change, however my guess is it will take some time to do as the gemmology school needs the teachers with the knowledge and also the equipment to use before this will happen.

I have set up Spectra Gem Laboratory (http://spectra.net.au/) as a separate business to my valuing business so as to not confuse the two, as I see them as two separate entities.