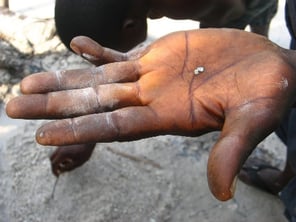 A "blood diamond" is a diamond mined in a war zone and sold to finance an insurgency, invading army's war efforts, or a warlord's activity.

I took this interview with Louise Maher from the ABC in August 2010, following the appearance of Naomi Campbell at a war crimes court in the Hague. Campbell had taken a gift of "blood diamonds" from Liberian war criminal Charles Taylor about a decade beforehand.

At the time of the dinner she didn't know that Liberia existed, didn't know who Charles Taylor was, or apparently even the value of the diamonds she was given, describing them as "dirty little stones". She denied other witness accounts that she was disappointed at the "pebbles" and would have preferred a "big shiny diamond".

Here's the transcript of my interview with the ABC:

[Louisa Maher]: There have been attempts over the years to try to stop the trade in these sort of diamonds, can you tell us about that?

[Rami Baron]: Certainly. A number of years ago when this whole issue erupted visibly to the public and to the industry itself - that countries were using their diamonds to support military regimes - the industry decided to take a dramatic approach, and it unified itself and it created what was called the Kimberly Process.

The Kimberly Process was done as a result of agreeing with the United Nations and the European Union, where 75 countries became signature to it and they formed what was called the World Diamond Council to stop the buying and selling of diamonds from any region which should use violence and human rights abuse and profit from this. This organisation has been in place since May 2000 and has worked tirelessly and very, very effectively in whichever way it can to do so.

Do you think it’s working?

I do believe it’s working. In fact it’s shown that the diamond industry is without doubt at the forefront of worldwide industries which are looking to take a step to prevent the profiteering of industry in the wrong hands.

Just how diamond rich are some of these countries?

Well, it’s hard to quantify that in real terms. There no doubt though, that there are millions of dollars of rough diamonds, and we are talking in this case of rough diamonds, in other words diamonds which are being pulled out of the ground which these countries have access to.

I think Naomi Campbell described the diamonds that she ended up with as "dirty looking stones".

[Laughs] Well, you know, if you take a diamond out of the ground, and you look at it, it would look like a pebble that you might just kick around. But it’s the artistry and the knowledge of being able to cut and polish and facet that stone which makes that gorgeous diamond in every woman’s engagement ring.

You say that the agreement... you believe it’s working, but surely there must still be quite a significant black market in these sort of diamonds, these diamonds that are being sold to finance conflict that does involve human rights abuses.

What you just said there, the only thing I would agree with is, does it occur? I think we would be naive to say that there isn't some small percentage which can find a way around any agreement. But when you use the word "significant", definitely not. It’s absolutely an infinitesimal percentage that would get out to the marketplace. It is being monitored enormously stringently, and the World Federation of Diamond Bourses (WFDB) in collusion with the WDC (World Diamond Council) have a tremendous process which shows a track - each shipment carries a certificate showing the details of where each diamond comes from, how they were mined, where they were cut and polished, the parties involved and their ultimate destination. It’s very strict.

So there does have to be, I suppose, a highly audited paper trail now of diamonds?

And this appearance by Naomi Campbell, obviously with this appearance she was going to be in the spotlight because of who she is, and as you heard her say she really didn’t want to be there giving evidence, I’m sure she’d rather be anywhere else. But it is a way of focusing attention on the issue of “blood diamonds”, isn’t it?

Look, there’s no doubt that, you know, the issues currently before the Hague are very serious issues and we’re dealing with something which you can use because the nice catch-phrase “blood diamonds”, but blood diamonds are not the problem the Hague is actually dealing with, what they’re dealing with is Charles Taylor, and you’re talking about the massacre, you know, and the atrocities of human life. What they’re trying to use is this one stone, in fact they’re actually talking about a stone that is the link for them to define how Charles Taylor, from my understanding that is, how he finances his situation. But the diamond industry, as an industry worldwide, took enormous steps to recognise the importance that the beauty of the diamonds has to be all the way down the path and up again. And that means we have to ensure the source is clean, and the it comes to have the purity and the beauty that when a woman wears it she has the confidence that it is a symbol of what is should be.

Or a man, absolutely.

Rami Baron, thanks very much for joining us.

What did I learn at Harvard?

I was recently fortunate enough to be invited to the GIA Leadership Program at Harvard Business School. The course was a tremendous opportunity to int...