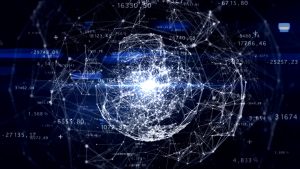 I will assume many of you have heard about Blockchain and no, it’s not jewellery. For those who haven’t heard about it or are unsure, Blockchain is technology which will have game changing impact on our lives and those of our children. I know you might be thinking this is a big call or I am being melodramatic, but by the end of this article you be the judge. I will give you my simple understanding of how Blockchain works and how I see it entering the diamond and jewellery trade.

To help jog your memory on where you may have heard about Blockchain, it was probably in conjunction with Bitcoin. Bitcoin is this alternative store of value to cash as we know it, as it only exists in the digital world but it can be converted back and forth to just about any currency via online Bitcoin exchanges. In today’s rate, one bitcoin is worth around the $850 USD mark.

Recently there was a lot of negative press about hacking. The hacks occurred on a couple of the largest online exchanges where users had allowed their bitcoin to sit, rather than immediately transferring it to a far more secure bitcoin “wallet” as is recommended.

The common misunderstanding is that Bitcoin itself was hacked – this is not the case. It is practically impossible to hack bitcoin because all transactions are recorded on an incorruptible ledger. This ledger was designed specifically to make bitcoin possible: we’re talking about the Blockchain.

Think of yourself as an “avatar” or virtual person. Today almost everything you do has an electronic footprint. Paying bills, going to the movies, buying food, school fees, cars etc. etc., and so we leave digital “bread crumbs” behind which tell a story about us. If you owned your own “Avatar” and it had its own Blockchain it means that everything you did was stored in this Blockchain.

Right now all your buying behaviour data is being vacuumed up by supermarkets, banks and social media sites. What if you could take possession and real ownership of this data and if the above groups wanted to use it, it would be your choice or you could release permissions and determine a price for accessing the data. When a song writer produces new work, their intellectual property could be protected on a whole new level, maybe a cent for us to listen to it and $100 for a movie theme to use it.

Where the Blockchain becomes a game-changer is with the ownership of property. Today we rely on governments which in western worlds are semi reliable (I don’t have huge confidence in their data security) but if you think in countries where dictatorships take over land holdings with the flick of a pen, then the Blockchain will guarantee proof of rightful ownership ad infinitum as a person’s title deeds will be stored on it, and no government could deny ownership.

Let’s try and visualise how it could be used in the diamond jewellery space.

We’ll start with diamonds. If we accept that rough diamonds are sold in parcels then it’s irrelevant the size of the stone, a parcel could have 5 stones or 20,000. All that is necessary is that a laser scanner (like we see in Sarin or OGI tools) could define each stone and assign it a unique ID. As the stone goes through its cutting and polishing process the Blockchain is updated, with additional bits of information about the stone by way of characteristics. When we deal with melee and mixed in parcels the individual stone could still be identified, even at .0025pt.

Yes, we would need a tool similar to what is being used now to identify synthetics, whereby you can pour thousands of carats of smalls into the machine and it will be able to identify them individually. I would say if you think this is too hard, think again - today in medicine we can identify a gene sequence which is a billion times smaller than a 1 pointer.

This approach doesn’t impede the commercial perspective of determining values but is the ultimate chain of warranties. We would eliminate a large number of issues associated with the Kimberly Process and the residual of the blood diamonds story.

The impact is even greater when you appreciate that not only have you created an identity of this diamond into the market place, but over the next two decades a significant proportion of diamonds set in jewellery throughout the world will be identifiable. Not to go off on tangents but this will have a disrupting effect on insurance both commercial and domestic, and no doubt could be huge in defeating money laundering and stopping the ongoing damage to the reputation of diamantaires worldwide.

Precious metal jewellery will be harder to track because of metals being remelted and combined, but 20 years ago there was technology which claimed it could do this and no doubt if we can look at the molecular world of living cells, then this won’t be impossible. A finished item of jewellery will have its own record on the Blockchain with a relationship to multiple gems with their own records in turn.

An example of how this might work, is that as you buy a diamond on a wholesale level three records are updated. The Blockchain logs a change in ownership for that unique stone and identifies that you are now the new owner. As the diamond itself logs change of ownership, it could even register its relationship to other diamonds in the ring as the ownership is not a singular one but moves in conjunction with others.

What about prices of diamonds worldwide stored on a Blockchain? As everything is on a user pay system then everyone benefits, it’s all about the rules you have set in the Blockchain on items you own. In simplistic terms, if you have a price list to which anyone who owns a diamond could contribute, you could choose to allow a third party to access your data. Try and remember it’s just data, but it’s your data and if you can earn a micro cent on this because someone has built a price list which would need to track price movements, then cumulatively this could become a new source of revenue for you, and a transparent price list in the world of diamonds.

Individuals or companies could choose whether the price is published with all its associated data or just the basics, each business rule attracts a higher or lower payment. The best part is that we achieve greater transparency which whether you agree with it or not, is here to stay and become more and more part of our lives. Are you fearful or do you see it as an opportunity? When you start to see the huge opportunities and tangents this can go you may agree it represents immeasurable value.