I could become the biggest diamond producer ever if...

Twice the radius of Earth, eight times the mass, and the surface is covered in graphite and diamond instead of water and granite.

This so-called super-Earth is named "55 Cancri e" after the sun-like star it orbits (55 Cancri) which is relatively close to us at 40 light years, and is in fact visible with the naked eye.

The planet orbits its star at astonishing speed, making the trip around in just 18 hours - a full year on 55 Cancri e is shorter than a single day on Earth! Incredible to imagine.

It's also a little warm up there, with temperatures reaching 2148.89 C on the surface.

Due to the extreme heat and pressure, and the strong possibility that the planet is made mostly of carbon-rich material rather than oxygen-rich material as in our solar system, roughly a third of the planet's mass could be made of diamond! 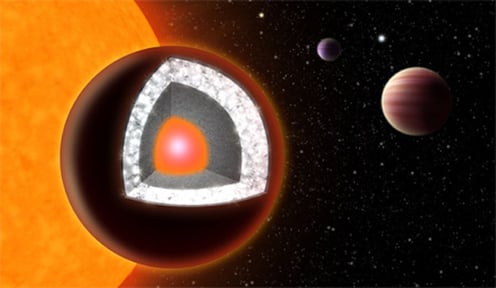 Further work is needed to figure out if this really is a planet made of diamond, but whatever the results turn out to be it's a remarkable object in every respect.

Rami Baron and Minister, the Hon Walter K Chidhakwa I write this article whilst in Antwerp Belgium as we come to the close of the 36th World Diamond C...

This March summit was hosted by the Singapore Diamond Exchange. Aside from a tremendous Asian summit, the SDE also hosted the WFDB executive committee...

The following is my recent interview regarding the DDCA, published in the Jan/Feb issue of Jewellery World What were the biggest highlights for the DD...